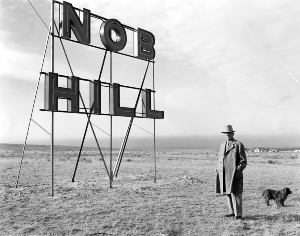 “Happy New Year from the Newest & Finest Located Residential District in Albuquerque”, said Col. DKB Sellers on his 1937 new year’s card. Sellers had platted the first addition in Nob Hill in 1916, encouraging prospects to “move out of the low zone and up to the ozone.”

At the turn of the 20th Century doctors had no drug treatment for tuberculosis and focused on “climatological therapy”; forced rest in locations of medium altitude, unpolluted air, and sunshine.  With its railroad connection dating to 1880 Albuquerque became one of the places where patients came, with their families, to “seek the cure”. Many prominent New Mexicans, among them architect John Gaw Meem and Governor Clyde Tingley, came to New Mexico to seek the cure for themselves or someone in their family.

At that time most of Albuquerque was located in the valley with its coal and wood smoke. Presbyterian National Tubercular Sanatorium was constructed on the east mesa out of the smoky valley early in the century.  The University of New Mexico, founded in 1889, was also established on the empty east mesa, an area otherwise used only for a few  ranch operations and cemeteries.

Born in Ohio in 1861, DKB Sellers owned a food and tobacco brokerage in Eureka, California in the 1890s and went to Alaska to prospect for gold after going bust in the Panic of 1896. His grand daughter, Sally Veseth, has said that the title of Colonel was an honorific that “someone gave him and he latched on to it. It gave him an official effect.”  In 1903 he arrived in Albuquerque where he got involved in the Territorial Fair and caused a sensation in 1906 by ordering two Oldsmobiles at the same time.

That was the year that he platted the western portion of University Heights immediately across Central Avenue (or Railroad Avenue as it was known) from the university.  He named the streets after prominent universities and sold residential building lots for “$5 down on each lot when purchasing two or more lots, and $10 down when purchasing only one lot.”

In 1916 he platted the eastern half of University Heights, the first subdivision in what is now known as Nob Hill. Developers platted four additional subdivisions between 1925 and 1931 and 80% of the houses in Nob Hill had been built by WWII.

Below is a photo from 1935. Central Avenue is the major east-west street. Monte Vista Elementary School can be located at the intersection of  the two diagonal boulevards, Monte Vista and Campus. Hermosa and Solano Drives formed the eastern frontier of Albuquerque. 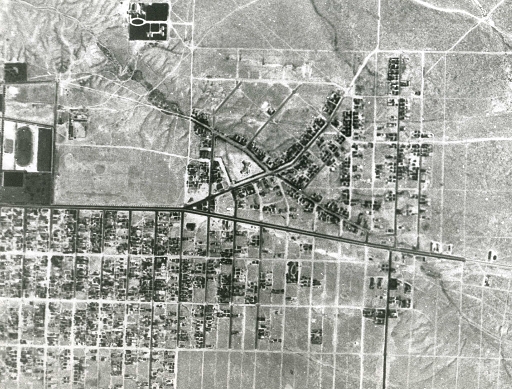